Record: NEVER GIVE UP 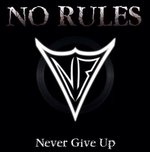 NO RULES - ONLY ONE RULE: NEVER GIVE UP!

The seemingly inexhaustible forge Swedish continues to produce talents within the metal, with a frequency and quality media that is astonishing, is that explore the territories of extreme music, whether strizzino the eye of the league with that magnificent hard rock infused with melody has made school, whether it cimentino in a robust and traditional heavy / power, with respect and competence retracing the footsteps of the masters of the genre.

And this is certainly the case of the mighty No Rules, which, far from being groped by the sounds more fashionable these days, dusted off a great heavy metal vintage, epic and compelling, characterized by deep timbre excellent singer Tony Karlsson (uvula school dickinsoniana), as well as by the abundant use of keyboards (in the care of Gert Olofsson) that not only serve as the atmosphere to enrich the melodies, but seem to form the backbone around which our build their valid compositions. As in all metal combo that you respect, obviously can not miss a couple of "axes", composed of very valid guitarists Johan Karlsson and Tommy Magnusson. Tommy in particular is the only remaining original member of prog trio of the same name which has published in 2006 the good debut album "Where We Belong", which took place before the establishment in 2013, which gave birth to the current lineup. The two musicians do a fine job, showing, in addition to an indisputable mastery of the tools, even a remarkable melodic taste and balance (not exceeding in virtuosity, but always put the right note at the right time). Complete the training Gunnar Evenbratt (bass) and Kevin Johannesson (drums), certainly a solid rhythm section that well supports the group's sound. The record in question is not the only birth of the new line-up, which already in 2013 had produced an EP ("Rock On"), where he had given proof of their musical qualities, although penalized by a production a bit 'too homemade that does not make them full justice. The songs of that album ("Rock On", "The Night is Over" and "Good Fight") were replicated on another for "Never Give Up" with amended title ("Dream and Rock On", "Love Was Alive" "Misguided Light", respectively), and indeed, with more resources available, earn a lot of sonic clarity and dynamic.

The disc, while traveling on the coordinates of a power vaguely melodic and symphonic (due to the already mentioned keyboards Olofsson), however, presents a variety of moods and atmospheres. "Hands of Steel" is a beautiful song Heavy, of those so fond of drawing, with good rhythmic gait, and a sense of drama emphasized riffs crescendo, the excellent work of the keyboards and a good vocal interpretation of Karlsson, really convincing. The aforementioned "Misguided Light" turns more decisively towards the formula of melodic hard rock and epic that made the fortune of Blackmore after his departure from Deep Purple in the mid-70s (yes, we're talking about rainbows!). "Occasion", a real riot of melodies, has the right cut to become a hit single, thanks to the contribution of the female voice, which gives that something extra to the chorus, really catchy, with a sound reminiscent of some symphonic metal by ranking. "Love Was Alive" is a beautiful ballad instead of atmosphere, not mushy, but rather done with that energy and dynamism that well befits a hard rock song. It goes great with a classic power lilting song ("Push"), a song that touches sounds more "obscure" and sabbathiane ("Die to Win"), the heavy classic "Dream and Rock On", with Karlsson on the shields which follows in the footsteps of evidently a Mr. Bruce, that we know well. Also excellent "Power of the Sea" and the title track, a song exciting, with the movements of a power ballad, which seems a bit 'the poster of the band: an encouragement to pursue their own ideals and to pursue their own ideas without never be discouraged. As you can imagine, in short, there is truly something for everyone: it is a disc with no apparent moments of decline, which brings together the various souls of hard & heavy traditional, mixing the different ingredients in a recipe really exciting and that certainly can make the happiness of metalhead, obviously those who do not pursue modernity at all costs.

7. Dream and Rock On

Number Of Tracks & Minutes On CD:

Our Thoughts On The CD:

They released their first album in 2006 and received great response all over the world & around 40 radio stations. later No Rules began to write songs for Never Give Up during the autumn of 2012, and soon the band had three completed tracks ready and a single was born named "Rock On." The CD's entirety was great sounding their wasn't a moment were we had to change the volume up or down when we went from one track to the next. The vocals didn't over power the instruments and vice versa.

We recommend that you pick up a copy and if not then at least give them a listion.

We liked tracks 1,4,7 & 9 the best due to their intense instrumentals and distinctive vocal contral.